The Congregation of the Franciscan Hospitaller Sisters of the Immaculate Conception was established in Goa in 1886 and spread from there to various parts of the country, having its headquarters currently at Mount Mary Convent, Bandra.

A Franciscan Hospitaller Sister is a person consecrated and dedicated to follow Jesus Christ and serves her brethren, especially the more needy. She commits herself to witness Hospitality, the specific charism of the Congregation, which is reflected in multiple forms of service.

As Franciscans, we follow the spirit of St. Francis of Assisi whose ideal was to live according to the Gospel. These few simple words are his Rule: “When the Lord gave me brethren, no one taught me what I should do, but the Lord Himself revealed to me, that we should live according to the Holy Gospel” (Testament of St. Francis 16 & 17). Being born and formed by the Gospel, the Franciscan vocation is open to all categories of persons and to all forms of apostolic activity.

We the Franciscan Hospitaller Sisters provide quality education through dedicated team work with our lay collaborators in a Christian environment to nurture godly,disciplined,morally responsible and enterprising citizens who will be assets and transforming agents to the society at large.

The Franciscan Hospitaller Sisters, a consecrated and prophetic Community with lay collaborators are called to EDUCATE, EMPOWER AND EVANGELIZE the young,especially the poor and to establish God’s Kingdom of justice and peace collaborating with the local church, in the spirit of Blessed Maria Clara and Fr. Raimundo,our founders under the guidance of St.Francis of Assisi, our Patron Saint. 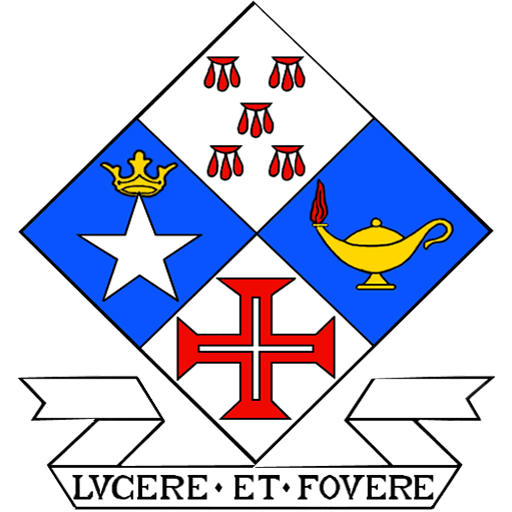 In the upper part of the seal are depicted the five bleeding wounds of Christ.

To the left in the blue portion the legendary star, with one of its points directed upwards and coinciding with the vertical plane, symbolizes Mary, as does the crown above the star.

To the right, the burning lamp signifies the oil that soothes the pains and wounds, and simultaneously feeds in the flames of that gives light and warmth.

Below is the Cross of Christ. At the base is the shield and outside it, is an interpretation of its meaning in the motto: “LUCERE ET FOVERE”. LUCERE means illuminate, enlighten and teach the doctrine by the example of ones life. FOVERE means to warm, to bear with, to stimulate, to encourage, fondle, soothe and care for. For the Franciscan Sister, two ideas united in one, are represented by the burning lamp, for Christ said, “Keep your loins girded and your lamps burning.” (Lk 12:35)

The pedagogy of the FHIC is Love, Welcome and Acceptance. It is realized in a community of brethren – the Educative Community – in which all, the Fraternity, Parents, Staff and Students and other agents of education are called to an active and responsible participation. It is manifested in a family ambience, in which hospitality, joy and simplicity characterize the relations among all the members of the Educative Community.