Maria Clara, a face of tenderness and mercy of God

The Church has just publicly recognized the servant of the Lord, Sr. Maria Clara do Menino Jesus, as blessed. Born in Amadora, on June 15, 1843, she was baptized in the Parish Church of Our Lady of Amparo, Benfica, on September 2, of the same year, with the name of Libânia do Carmo Galvão Mexia de Moura Telles e Albuquerque. She was the daughter of Nuno Tomás de Mascarenhas Galvão Mexia de Moura Telles e Albuquerque and of Maria da Purificação de Sá Carneiro Duarte Ferreira.

As the third of the seven children of that noble and profoundly Christian family, she was received with deep love. She lived a happy childhood and, right from early days, began to open her heart to the loving presence of God, helped by the Christian witness of her parents. When still an adolescent, she suffered the terrible experience of becoming orphan of both parents. At the age of 14, she joined the Asilo Real of Ajuda, managed by French Sisters, the Daughters of Charity of St. Vincent de Paul. When, in 1882, they were expelled from the Portuguese territory, Libania was invited to reside with the Marquises of Valada, her relatives and friends and stayed with them for five years.

In 1867, she joined the hostel of St. Patricio. Two years later, at the age of 26, she joined a group of Capuchinhas of Our Lady of Conception. From then on, she lives the adventure of progressive immersion in the mystery of Christ and, participating in his compassion, she penetrates in the disconcerting world of human suffering, to illuminate it with joy and to warm it with the tenderness and mercy of God

After a protected and happy childhood in her adolescence she was visited by deep and repeated sufferings. When her heart was inclining to take a vocational decision, she witnessed the departure of her sister Matilde to join the monastery of the Visitation. Years later, the Marchioness of Valada, a friend and confidant, decided to follow a similar path: renouncing to material goods and to a life of luxury, she left for France, to join the religious life.

At that time, it was possible to perceive the invitation of the Lord Jesus to the heart of Libania, calling her to follow him by the paths of detachment of the franciscan life. She responds to this appeal, by joining a small and unknown group of franciscan tertiaries, whom Fr. Raimundo dos Anjos Beirão supported with spiritual and material help. There, in a poor convent environment, Libania encounters the Christ of Francis and Clare of Assisi, the poor, humble and crucified Lord.

This encounter with the Lord and the irresistible attraction that He exercised upon her heart constituted a strong challenge to the yearning and ardent soul of Libania. Supporting the decision of leaving wealth and her privileged social status, a noble matrimonial bond and other advantages arising from her lineage, Libania decides to join that group of consecrated persons. In 1869, she receives the habit of Capuchinha of Our Lady of Conception, in the Convent of St. Patricio and comes to known as Sr. Maria Clara do Menino Jesus. She enters now the path of detachment and descent of the Word of God, in His Incarnation. With Him, the Child Jesus whose name she bears in her own, she immerses herself in obedience to the Father in poverty, humility and minority.

The desire to follow in his footsteps leads her by the unexpected paths of a covenant that will culminate in the total configuration with Him, unto extreme solitude and abandonment of the cross. The heart of Fr. Raimundo dos Anjos Beirão sees in Sr. Maria Clara the woman chosen by the Lord, to start with him a congregation that will bend down, in samaritan attitudes and gestures, upon the wounds of the Portuguese society of the middle of the XIX century. For that reason and because in Portugal it was forbidden to make professions, in February 1870, under the guidance of this dedicated priest, Sr. Maria

The poverty of goods was severe in the convent. The Sisters tried to live of the work they did, but very often their income was not sufficient to supply their own most elementary needs and that of the persons whom they helped. Like Jesus, totally dependent on the Father, Sr. Maria Clara lives an experience of receiving everything from the provident hand of the Lord, even the daily bread for her and for her  community.

The chronicler narrates that, on a certain day, the Sisters reached the refectory for dinner and there was nothing on the table, except for a few pieces of hard bread. Mother Clara tender-heartedly informed them: My Sisters, Our Lord did not give us,today, anything with which to prepare the dinner. The Sisters humbly shared the left over bread. This childlike trust was answered in an extraordinary manner, when the servant of a well to do family came with a basket of various delicacies. Thus, the Sisters were able to nourish themselves that night. Similar facts took place innumerable times, during the life of Mother Clara, thus confirming her in path of trust in the Father and filial dependence on His provident care.

Right from adolescence, Libania experienced a painful detachment. When she became orphan of her mother, in October 1857, she went to live in the Asilo Real of Ajuda and some months later, she suffered another very painful blow, with the death of her father. There, away from her home, separated from her brothers and sisters whom she loved tenderly, away from the contact with other family members, the memories, nostalgia and solitude pervaded her life. Together with them, the Lord also came to illuminate and to warm that harsh desert, to cause it to bloom. In the measure that the human securities were crumbling, He occupied the whole space of her life.

Again, in religious life as well, she did not lack heart breaking surprises that would make her succumb, had her firm faith, trusting hope, the strong conviction that nothing happens in the world without divine permission not sustained her. Everything seemed to be converging towards failure and the disappearance of the work of God that was born in her hands. It is sufficient to recall a few episodes in her life: the fierce persecution moved against the newly started congregation, just because it existed; the death of the founder, Fr. Raimundo, who left her without the help that she needed, in the management of the emerging institute; the consequences that arose from the exercise of a feminine leadership, that was uncommon in those days; the long judicial process, unjustly raised by César Macedo, that led her to the dock, for debts that she had not incurred; the monstrous process of the “Case of Trinas”, that gave rise to fresh calumnious and defamatory press persecution, widely published, with humiliating repercussions; the several apostolic visits, with the implication of analyses and arbitrary judgements; the impositions, questionnaires and prohibitions from the ecclesiastical superiors, which she accepts without even understanding, and fulfils as if coming from God himself; the attempt to depose her from the office of superior general, forged by misunderstanding, calumnies and hostilities not only from outside, but from inside as well.

As a result of all this, above all arising from the Case of Trinas, the moral and material support from the benefactors to the works that arose from the charity and diligence of Mother Clara started becoming scarce. In some situations, the Sisters who offered her understanding and support in the great trials that she underwent were being removed from her company. Once more, the solitude and silence from God fell upon her, afflicting her painfully.

To everything she reacted the way she learnt from the Master: to accusations and calumnies she responded with gestures of a more sincere charity; to the trials that the Lord permitted her to experience, she reacted with renewed confidence, with a more deeply seated love and with the joy of one who knows that the Sun of justice can eclipse 6 just for a moment, but to reappear with greater splendour, as she would say later.

With deep humility, she bent down before the dilacerating sufferings that affected her. She did not lose either her joy or peace, she did not deviate from the activities inherent to her mission and it was with dignity that she carried them out. She did not quit from the commitment of doing everything so that truth might shine out, because she learnt from her Master that only truth sets us free.

Just as the joy of the Spirit dwelt in the heart of the Lord Jesus, many a times causing him to exult before the presence of the Father and of His loving action, so did Sr. Maria Clara bear attractive radiating joy and good humour. In moments of community recreations, some Sisters liked to be by her side, because next to Mother Clara nobody could remain sad, as they affirmed. This joy that arose from the contemplation of the good Lord, led her to express her wonder, during her life, in view of the steadfast and touching discovery of her heart: How good God is! Blessed be God!

The filial and loving relationship of Sr. Maria Clara with the Mother of God is filled with tenderness and trust. The Lord Jesus is the Son of the blessed Holy Virgin 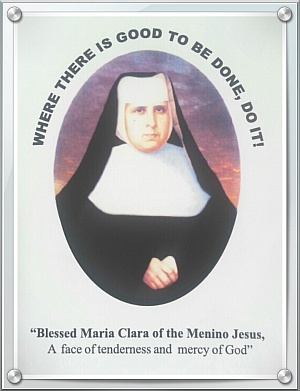